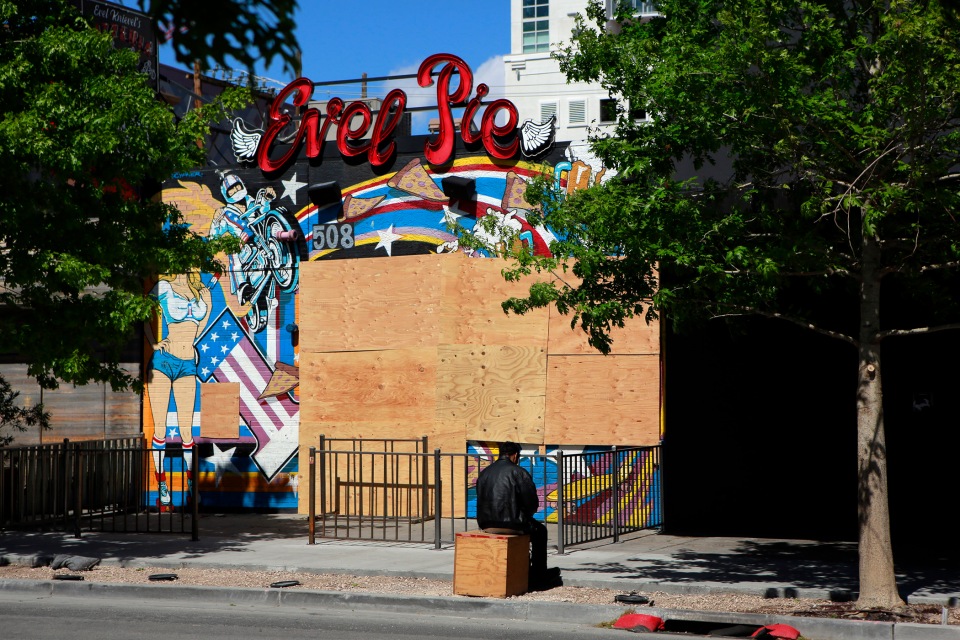 The desolate downtown and Arts District are photographed on Day 10 of a statewide quarantine for COVID-19 in Las Vegas. The notorious Fremont Street Experience is closed off to pedestrian traffic and security guards stand by. Local artists have painted plywood that boards small businesses’ window fronts. Southern Nevada hunkers down for what I only fear is the beginning of the new normal.

Ronda Churchill is a freelance photojournalist available for hire worldwide. You can follow her on Instagram @rondachurchill 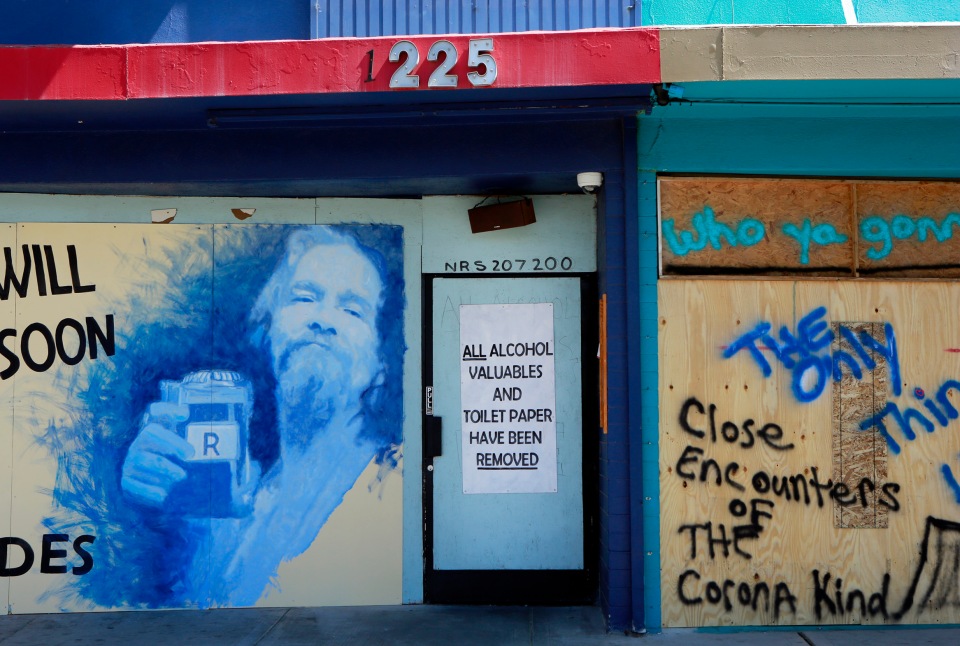 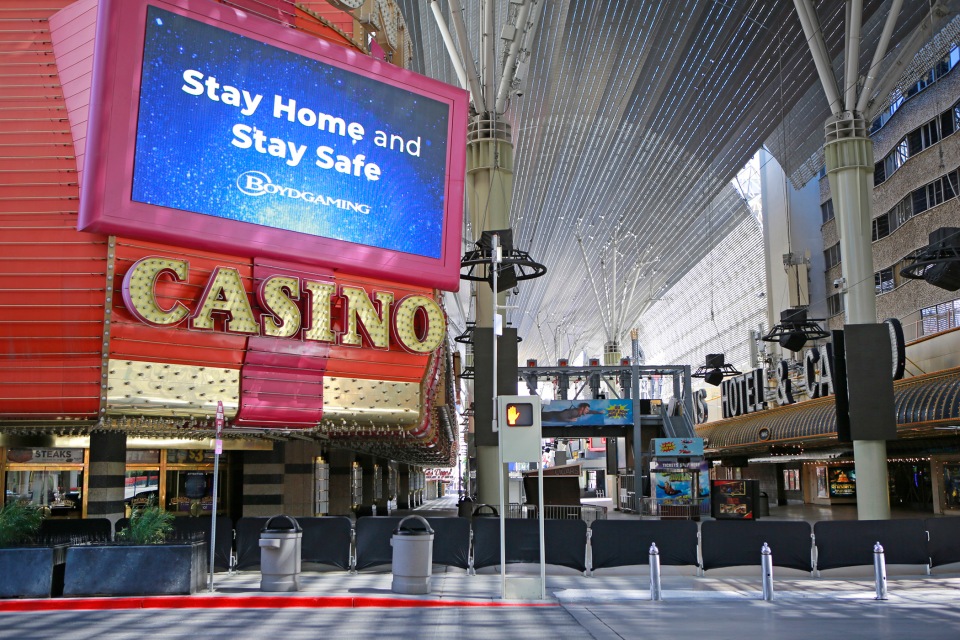 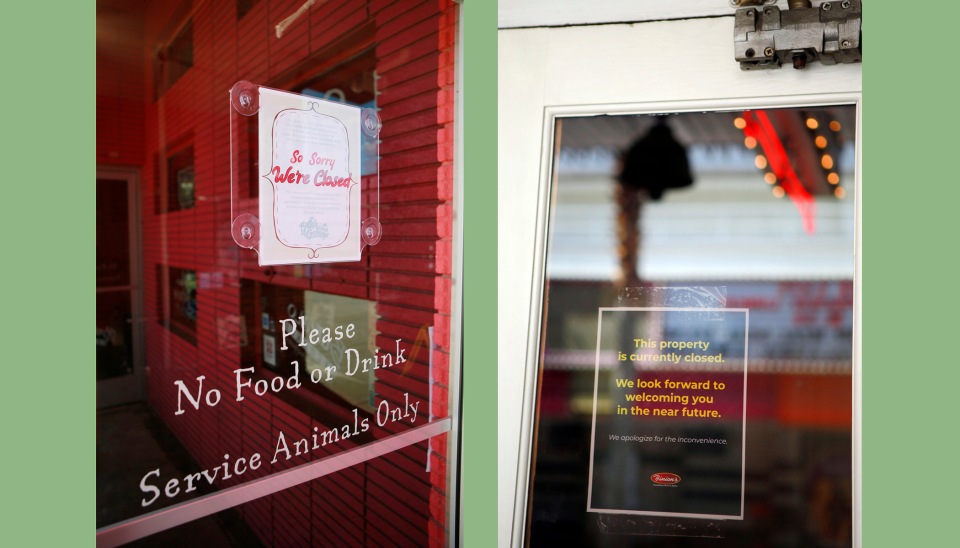 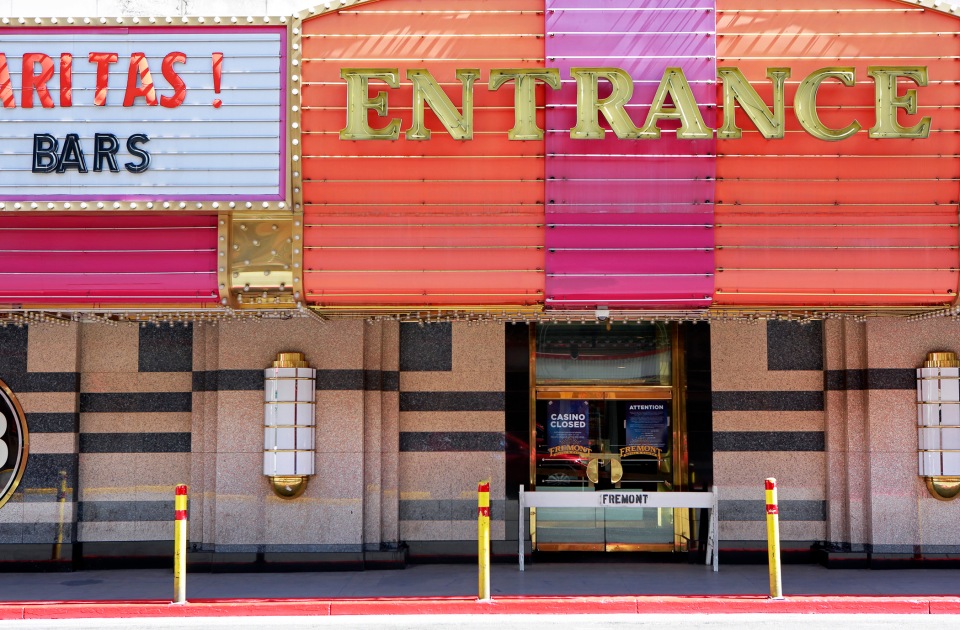 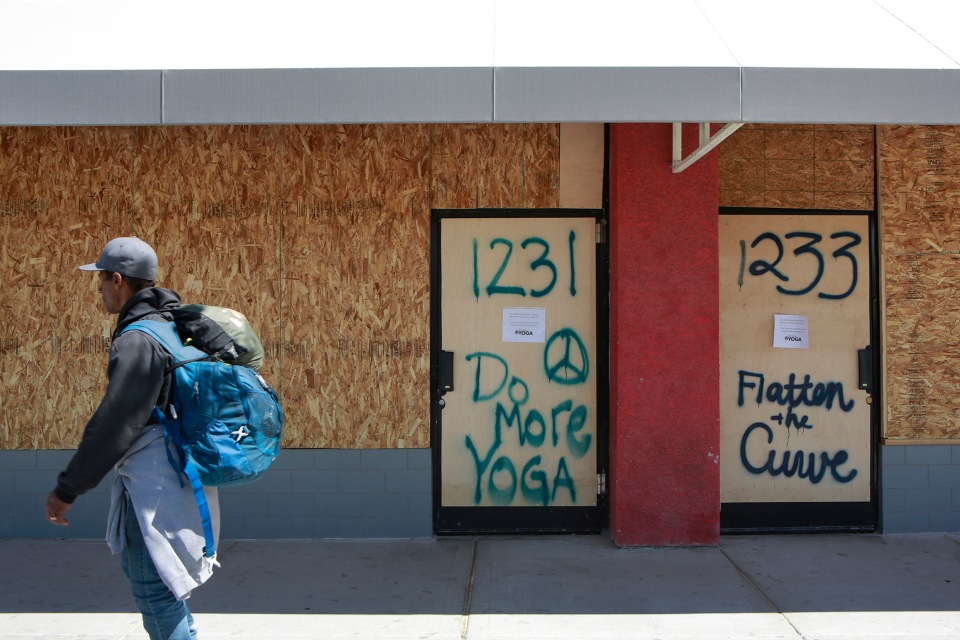 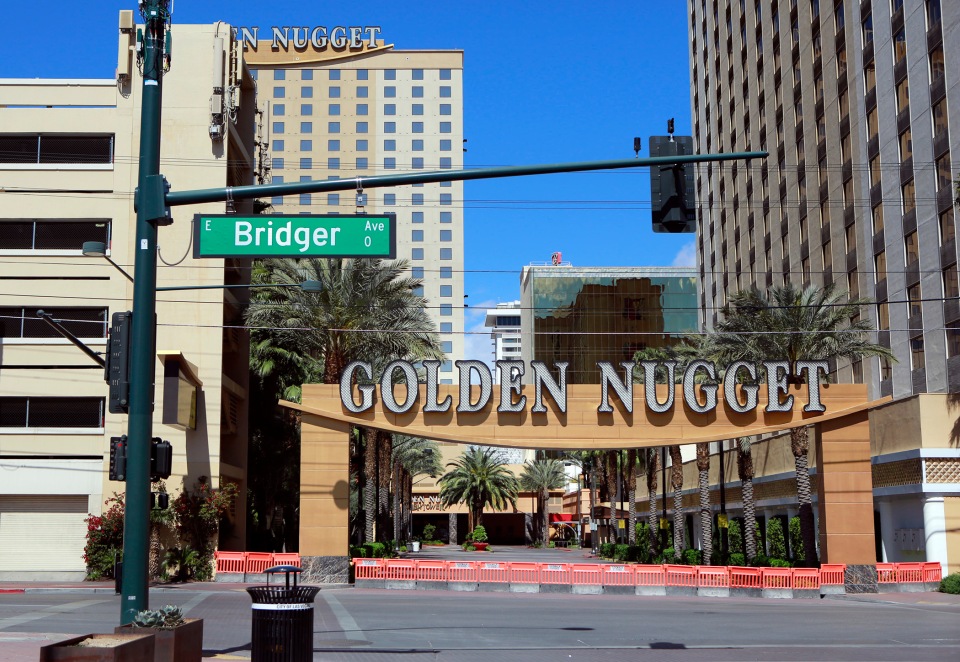 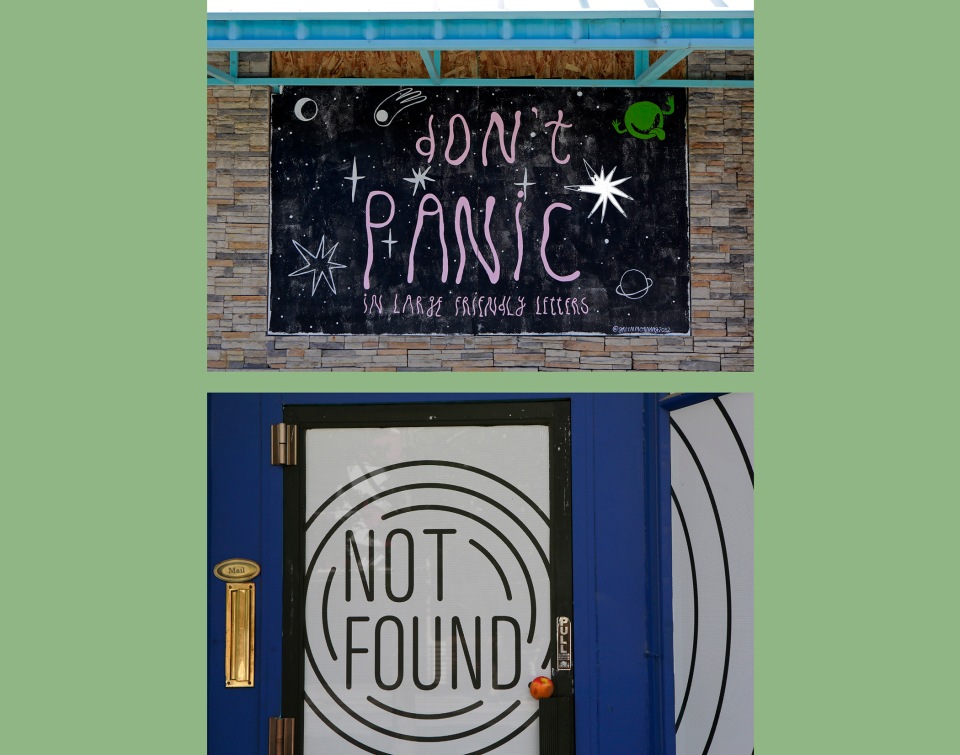 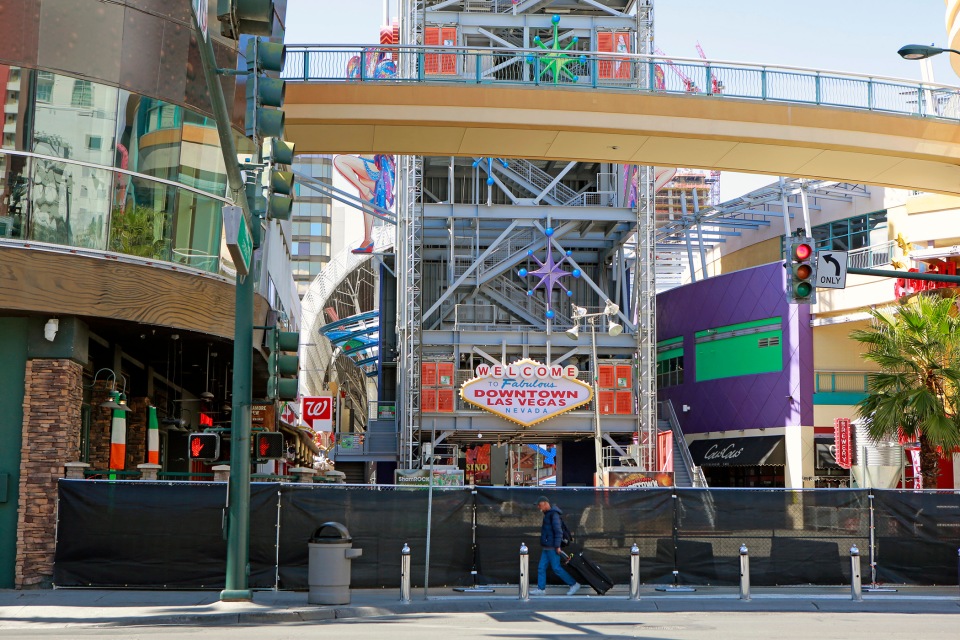 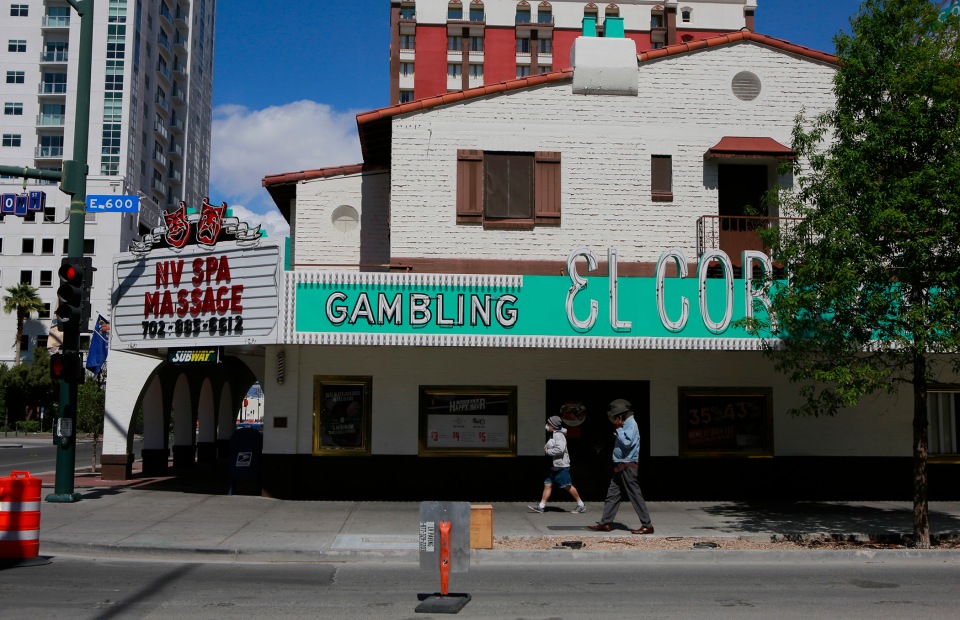 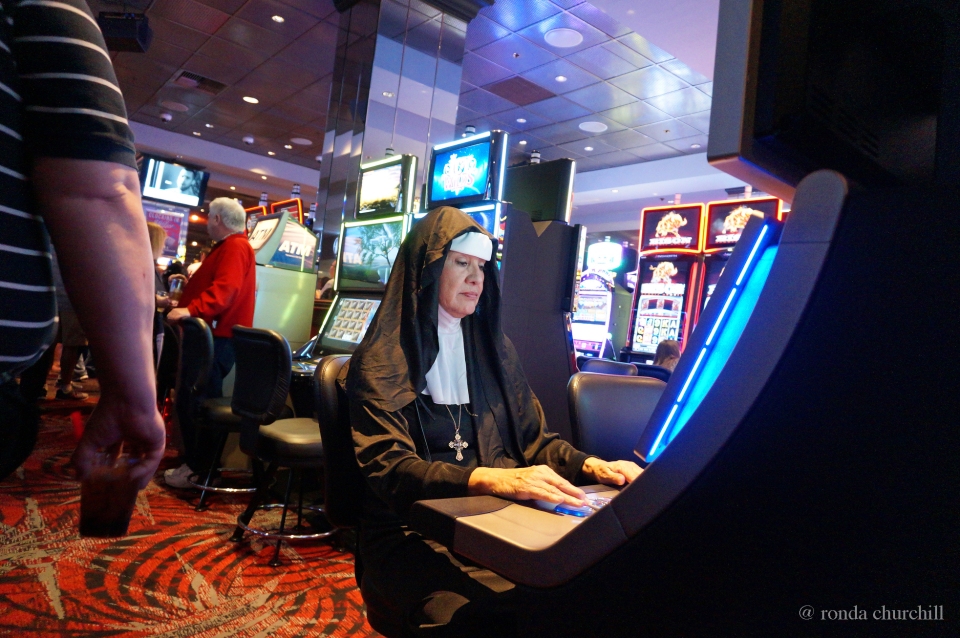 A woman from Texas dressed as a nun plays a slot machine at The D hotel-casino.

Halloween might be my favorite holiday. People stress over which home or city to celebrate in and what food and gifts to give for nearby Thanksgiving and Christmas, but Halloween offers a much more fun opportunity to gather with friends and family. Throw in the fun of costumes, and it’s a win-win holiday.

As New Orleans is to Mardi Gras, Las Vegas is quickly trending to be a Halloween hotspot. Since Las Vegas is the city that celebrates everything weird and wacky, it should come as no surprise that Halloween is big here. Nearly every establishment features a unique gathering.

Perhaps I favor the holiday more than the average person because I met my husband on a blind date six years ago on Halloween. We ducked from the evening sun into a dark bar on Las Vegas’ historic Fremont Street in 2011. What I noticed more than his Dos Equis beer’s “Most Interesting Man In The World” costume were his kind demeanor, honest personality and nice hands. My husband says that I was engaging and had a good smile. I like to think I conveyed a warm personality despite being dressed as a dead prom queen.

Afterward, we walked under the famous nearby canopy to “people watch,” which is still one of our favorite social pastimes. As we walked, a cluster of people all dressed as Where’s Waldo? ran past us. We took an elevator to the top of a lookout area to view costumed pedestrians, and we commented with laugher on the most unusual ensembles.

At the end of our brief evening, I made him stand for a photo next to an arcade game not unlike the fortune teller machine in Tom Hank’s cult classic “Big.” The customized case before us featured the bust of an old man named Pappy. My date, who wore a month’s long beard that was dyed gray and little commercial branding for his costume, resembled the old man puppet ever so slightly.

This Halloween, when I drove down the never-ending loops of the casino parking garage, I commented to my sleepy and slurry husband that this particular evening was my favorite evening of all of 2017. We had such a fantastic time revisiting “our bar,” people watching with an older Minnesota couple on “our” overview looking spot, and walking the length of the canopy in our costumes. I was Lucy. He was Charlie Brown complete with football. We handed out Halloween candy from a gift bag to the children we encountered, and we even accumulated extra treats from people thinking that we were trick-or-treating.

There is no denying the encompassing and exciting vibe that is Halloween on Fremont Street. It is one that begs to be witnessed. For those who were not lucky enough to see it in person, I offer up this treat. 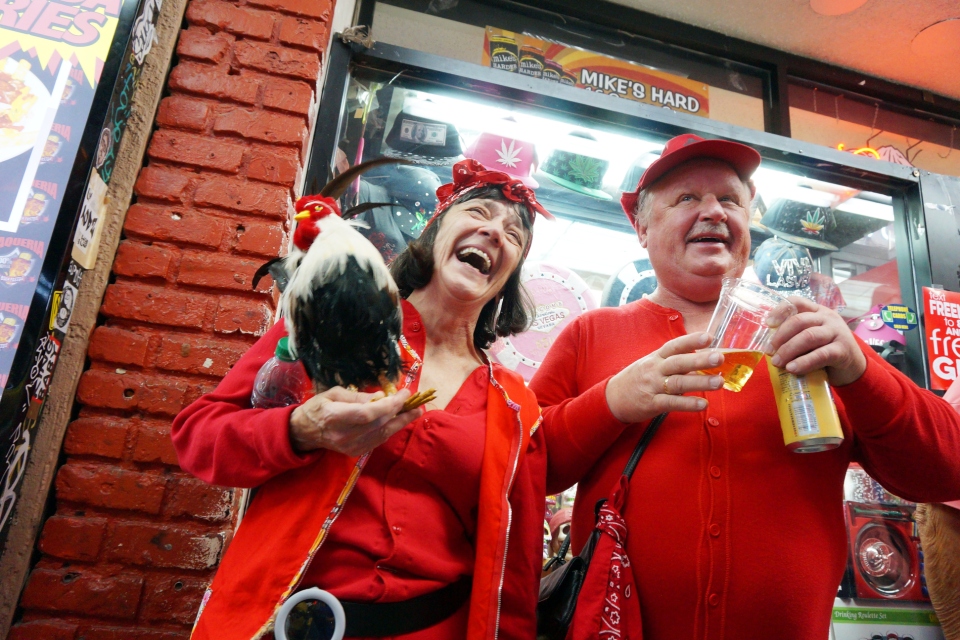 Pam and John Casteel, of Michigan, are dressed as cock hunters. “Well, weve been doing Halloween every year that we have been together. It’s been 44 years,” he said. 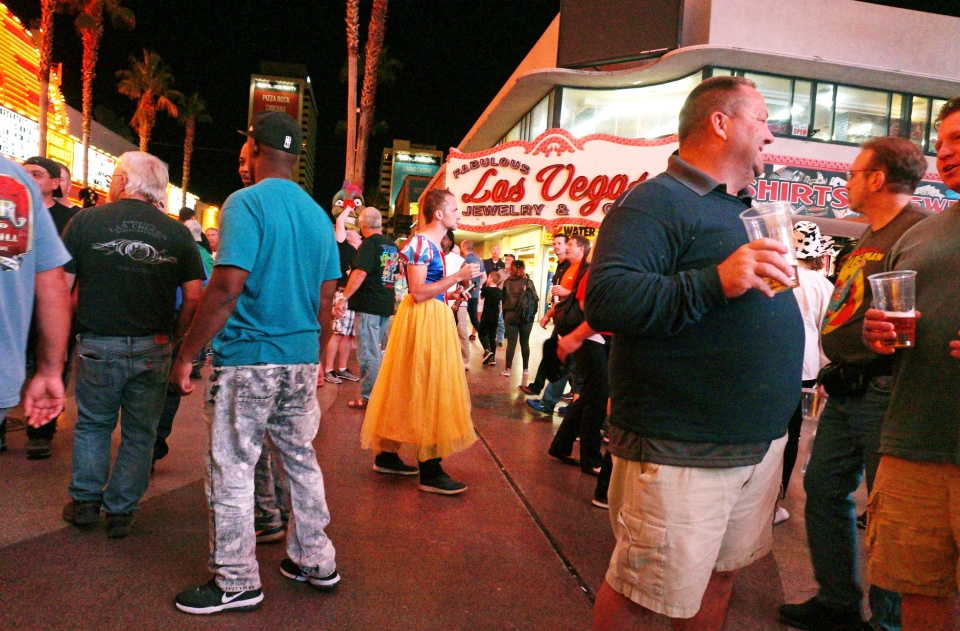 A young man wearing a Snow White dress weaves his way through the crowd on Fremont Street. 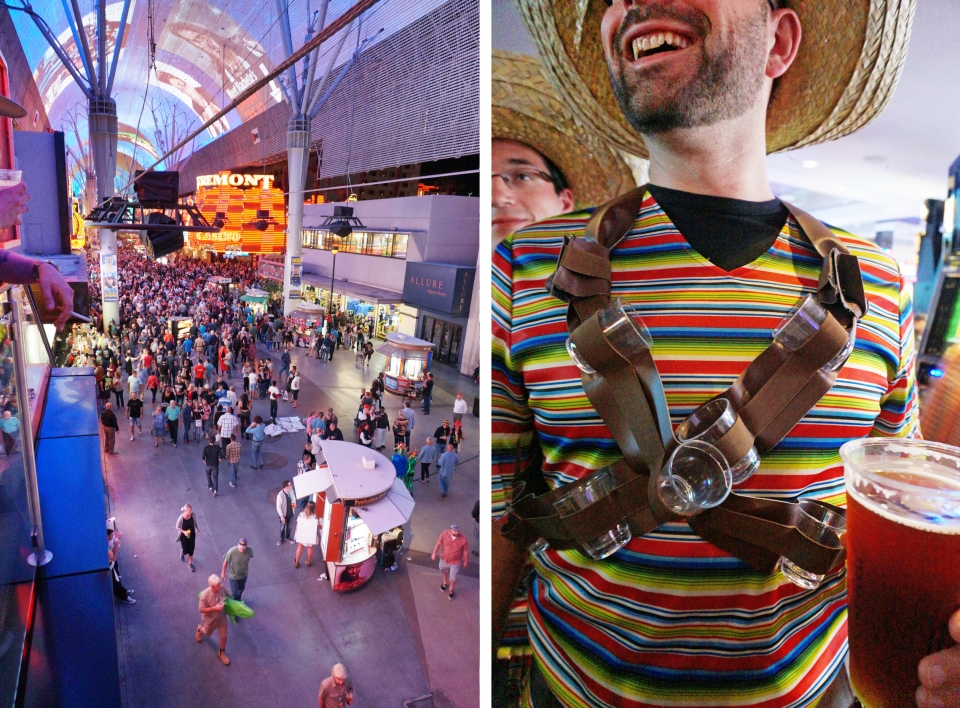 People walk along Fremont Street under the canopy (left), a man participating in a group costume wears shot glasses in place of rounds of bullets and holds a beer. 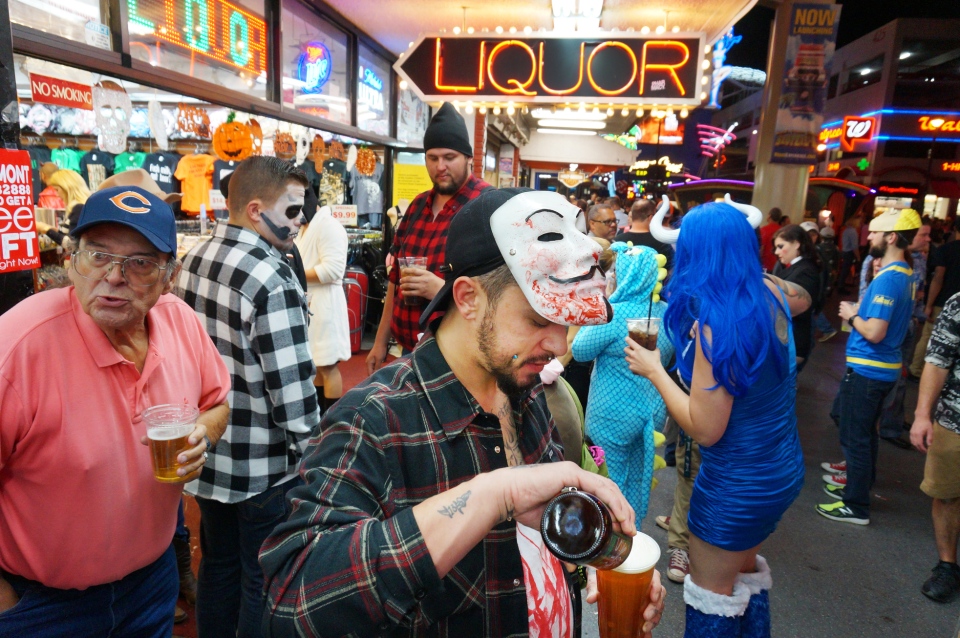 A man in a customer pours beer into a plastic glass outside a souvenir shop. Glass containers are not permitted on the street. 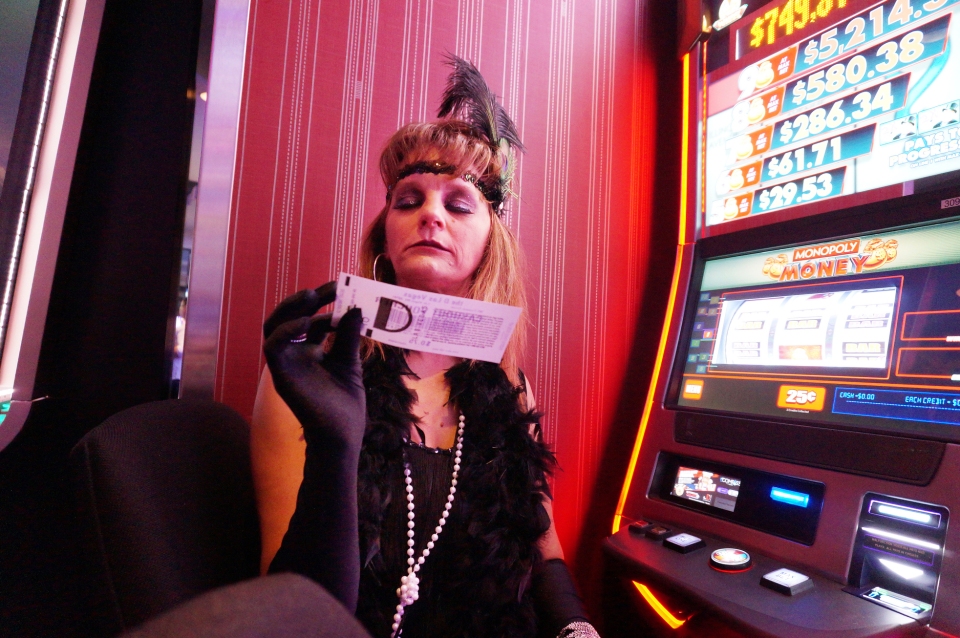 A woman in a flapper costume stares at her losing 75-cent ticket after playing the slots. 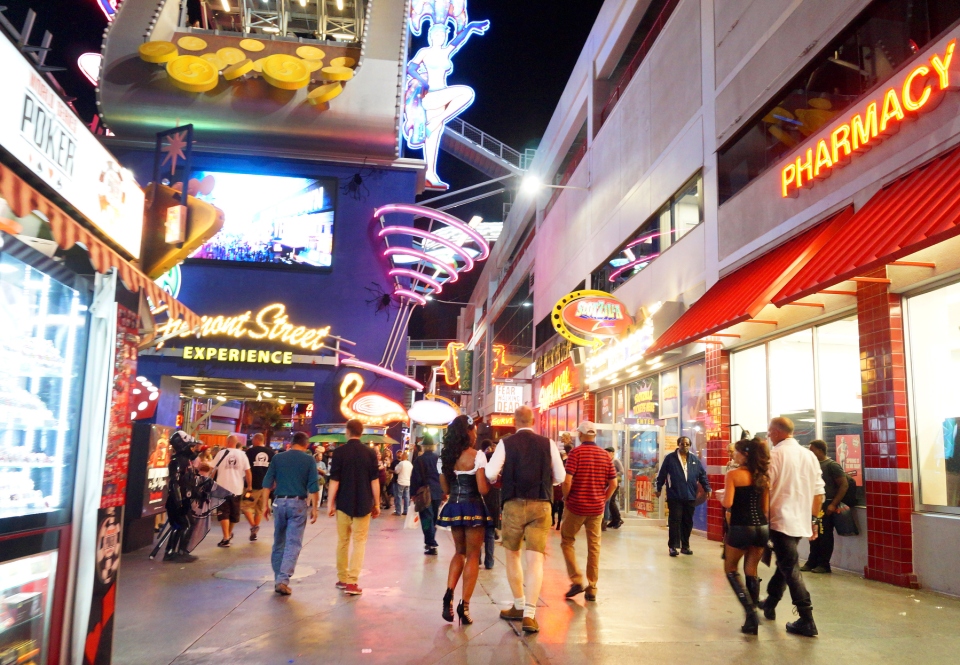 A couple in costume walks along Fremont Street. 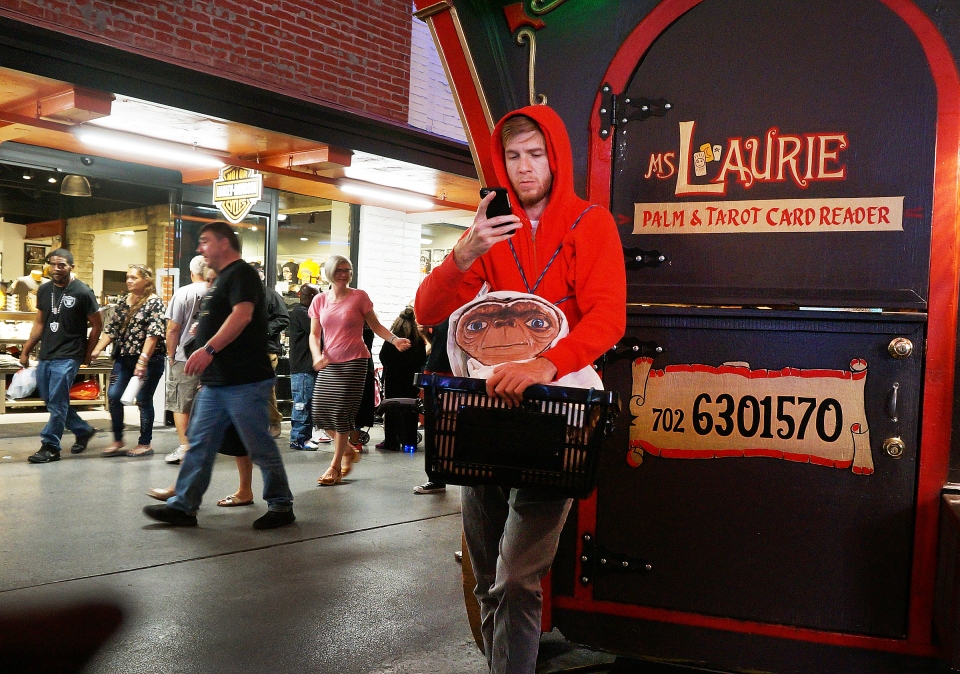 Russell Nunley, of Salt Lake City, looks at his phone while dressed as Elliott from E.T. He purchased the basket he holds for $5 from a manager at Albertons grocery store. 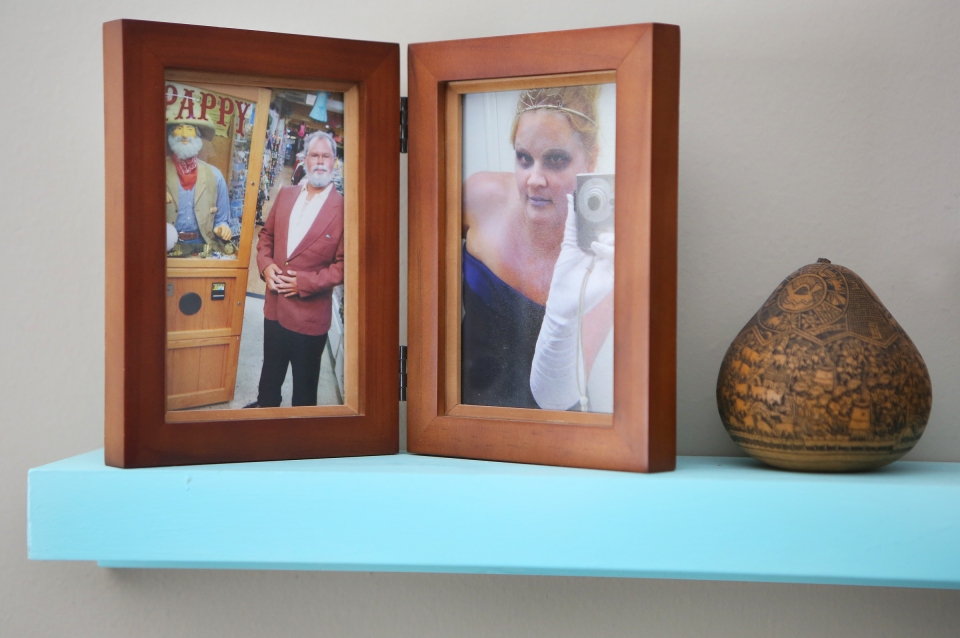 Photos in our home of my husband, left, and I on the night we met. 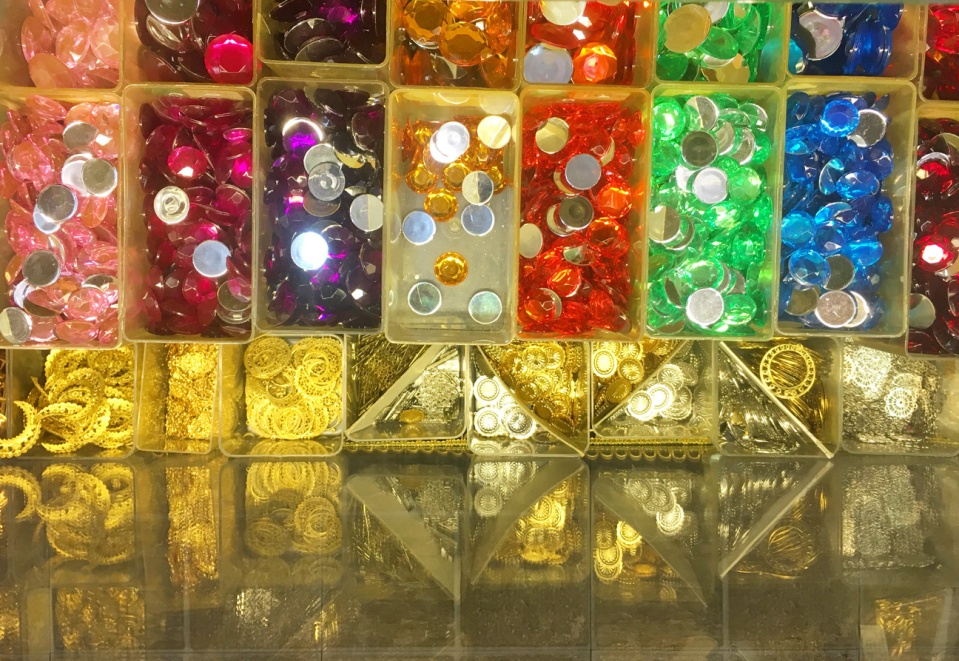 Acrylic rhinestones and faux gold embellishments are shown in a case.

It is the perfect stop for all things fun and pretend. The moment you walk through the door and round the corner by the counter, adult worries and everyday life are replaced by the endless possibilities of a child’s fantasy. Creativity comes to life with each touch of a feather, each glimpse of fabrics and trimmings and every peek into case after case of tiny jewels.

Williams Costume Company is the treasure chest; what will be your booty?

If crafting is not a strong point, there is also an entire apartment-sized room stocked with multi-piece and custom-made costumes ready for rent.

The store, which has been a neighborhood anchor for 60 years, receives customers of all kinds. A clerk told me that “anybody and everybody that has a creative side” are clientele. Customers include: theater people; costume and clothing designers; street performers; crafters; jewelry makers and students.

On a rainy Saturday a couple hours before closing, my sisters, husband and I were lost in the store calling out to one another rows apart to come see what we had found in our corn maze of creativity.

With my iPhone only, I started to document my discoveries; I hope you enjoy this little gallery of treasures. 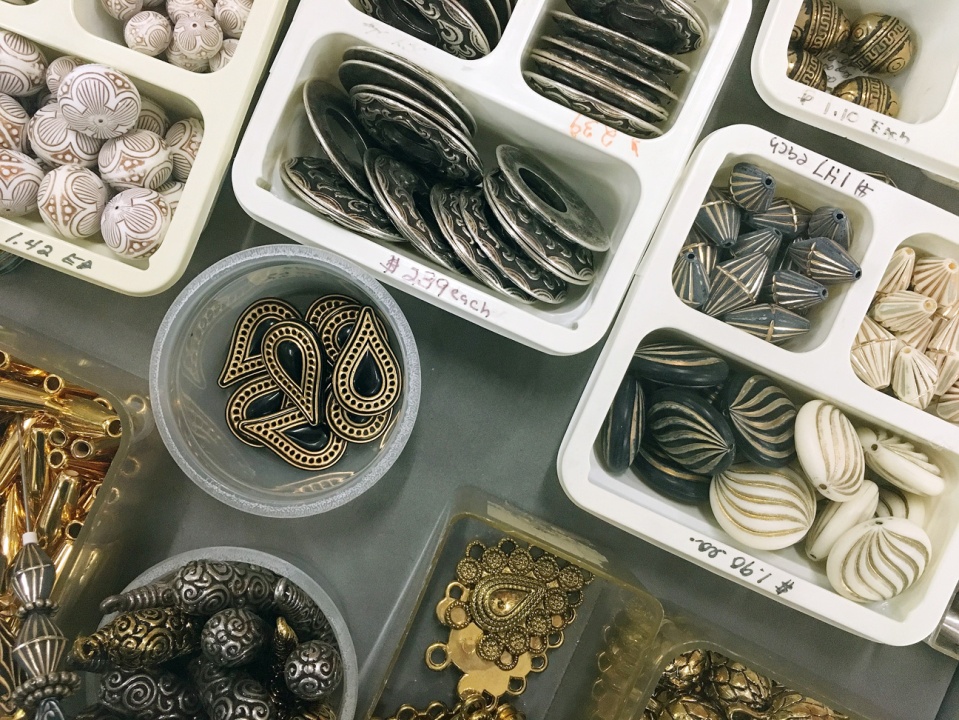 Miscellaneous metal and acrylic notions are displayed in a case. 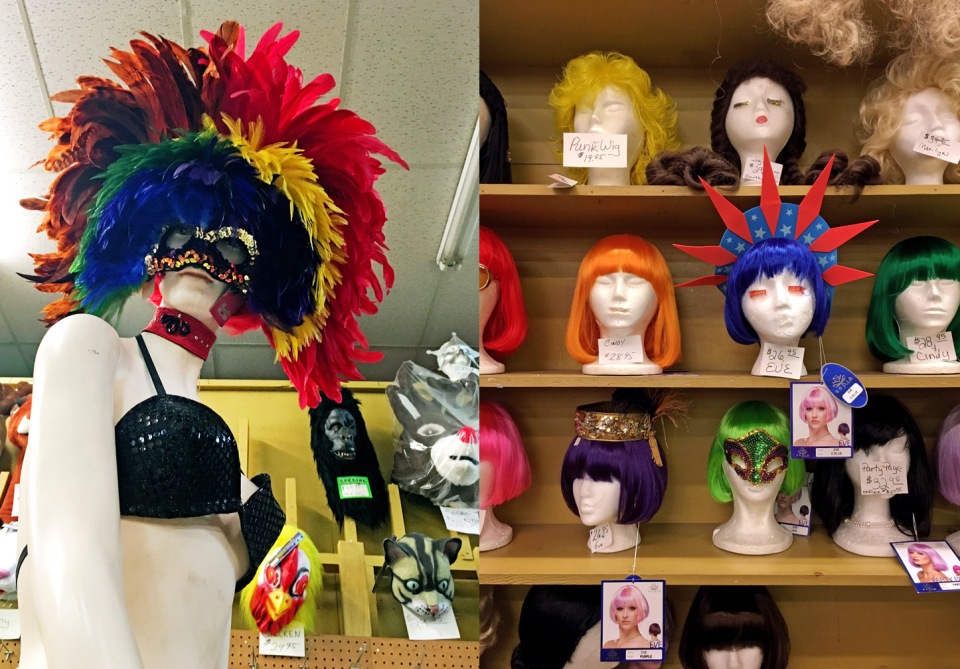 A showgirl headdress, masks (left) and wigs (right) are shown. 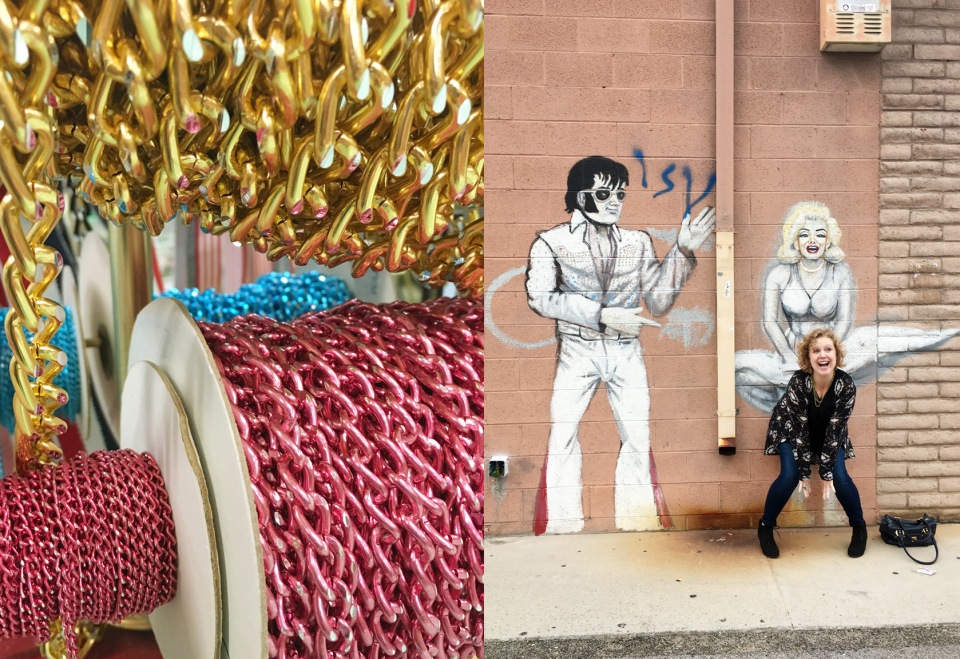 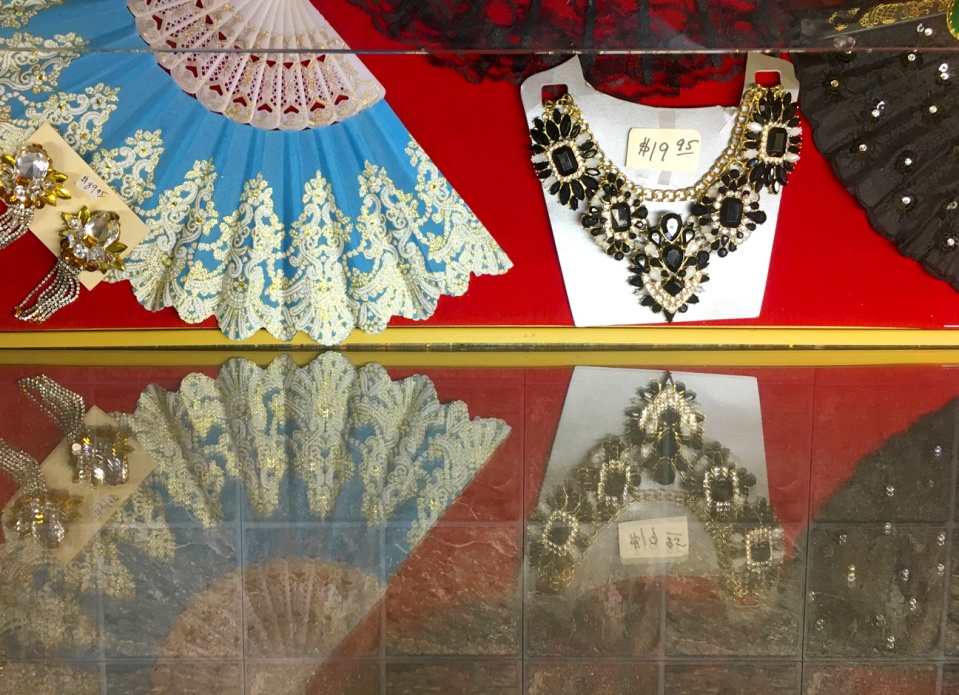 Feminine fancies are displayed in a case.