A model that goes by Weed Slut 420 sinks into a ball pit on the showroom floor.

Close your eyes and imagine you could visit a place where you are immersed in adult sex fantasy. Open your eyes. You are at the Adult Entertainment Expo in Las Vegas.

For the third consecutive year, I attended and documented real-time erotica and was one of more than 50,000 attendees. Everything sex, including: well-known adult entertainment stars, “Cam Girls” live streaming for tips, loads of all types of bedroom toys and apparel, and fetish demonstrations can be seen in one bustling hotel convention space that hosts a multitude of mainstream events and concerts at any other time of the year.

It takes quite a mind shift to exit a typical Vegas casino space, passing blinking machines and tourists, in order to enter a world of sex where anything and everything goes.

Standing in security near the main halls, one may see a woman leading a chained man wearing a head mask. Sex slaves and their masters also attend the show. And for the price of less than $100, you can attend too. However, attendees and media alike must sign an agreement that states touching and inappropriate behavior with models and exhibitors is strictly prohibited. The master and her masked man must have arrived together.

The expo prefaces the main card of the Adult Video News Awards and red carpet event, where the biggest names in adult entertainment walk a red carpet, weaving through the casino length, to an awards ceremony for the previous year’s film work.

Since 2012, Hard Rock Hotel has hosted the AVN Awards and expo each year in January shortly after the culmination of the city’s massive Consumer Electronics Show. Whether visitors to Sin City are viewing larger-than-life home electronics or adult stars, January in Las Vegas will not disappoint.

*Ronda Churchill is a freelance photojournalist working in Las Vegas and can be booked at http://www.rondachurchill.com Follow her on Instagram @rondachurchill

A model stands among confetti at the VIXEN booth.

An elderly man, left, takes a photograph of customized adult toys while another attendee gives a closer inspection. 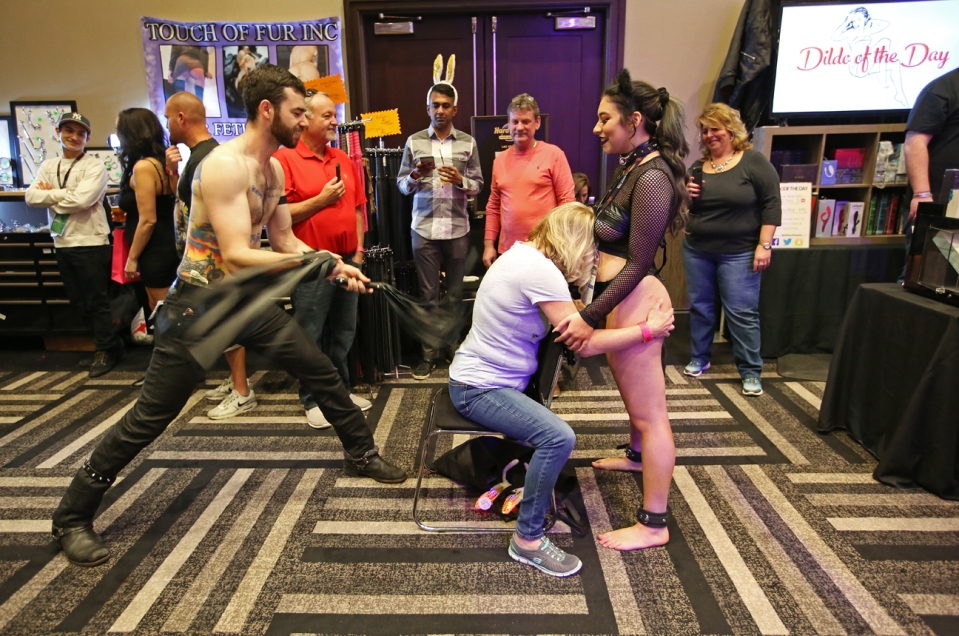 (top left) Juniper, a Cam Girl, flirts with a client while live-streaming at the convention. (top right)  A Cam Girl’s computer is adorned with stickers and external lighting. (bottom) AK Ginger Snaps is illuminated by a modeling light at a live-streaming booth. 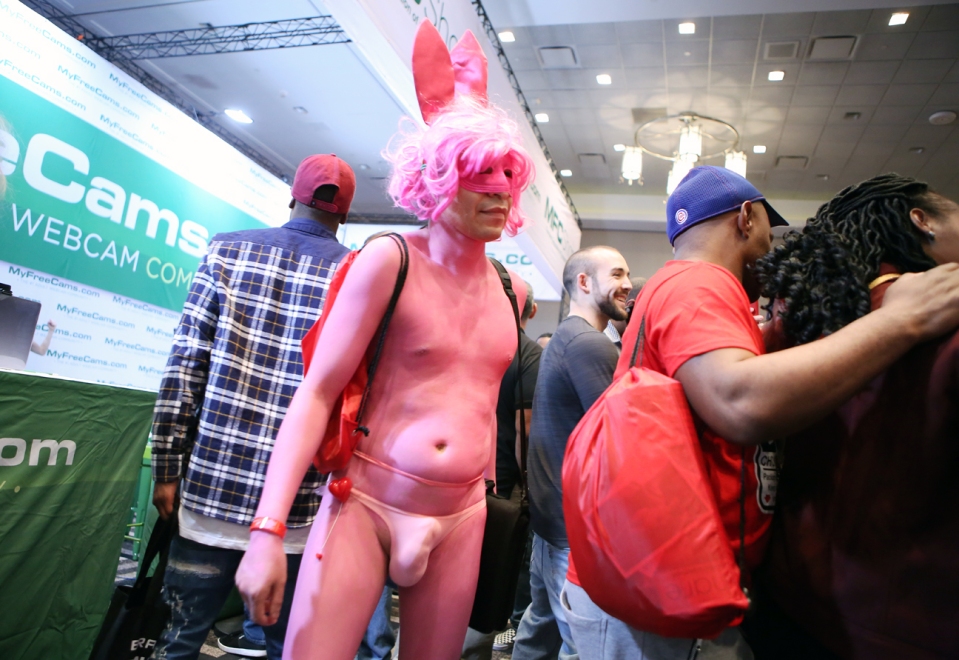 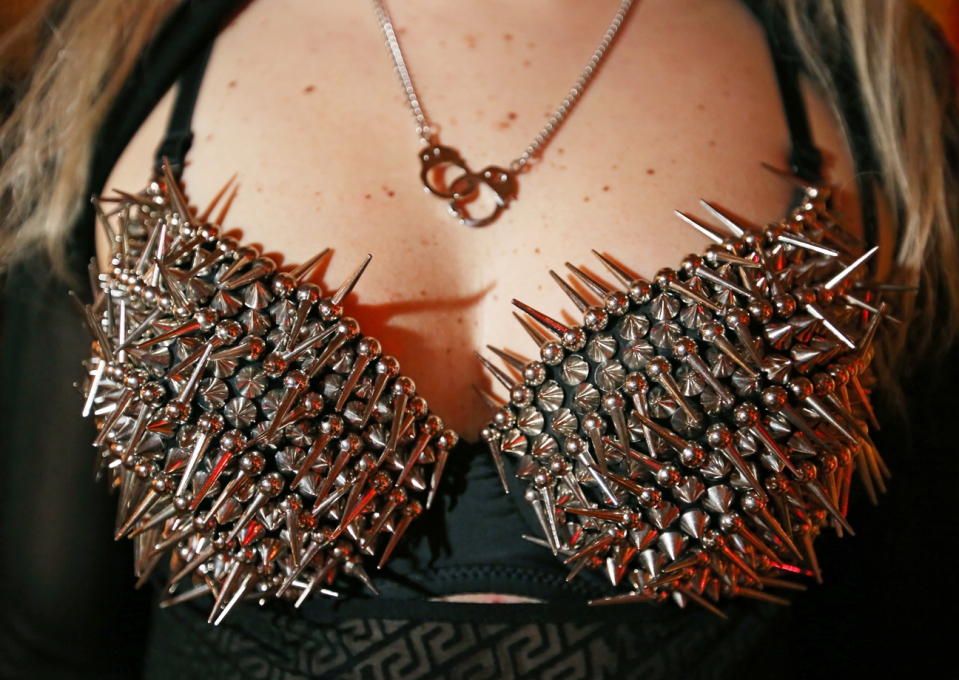 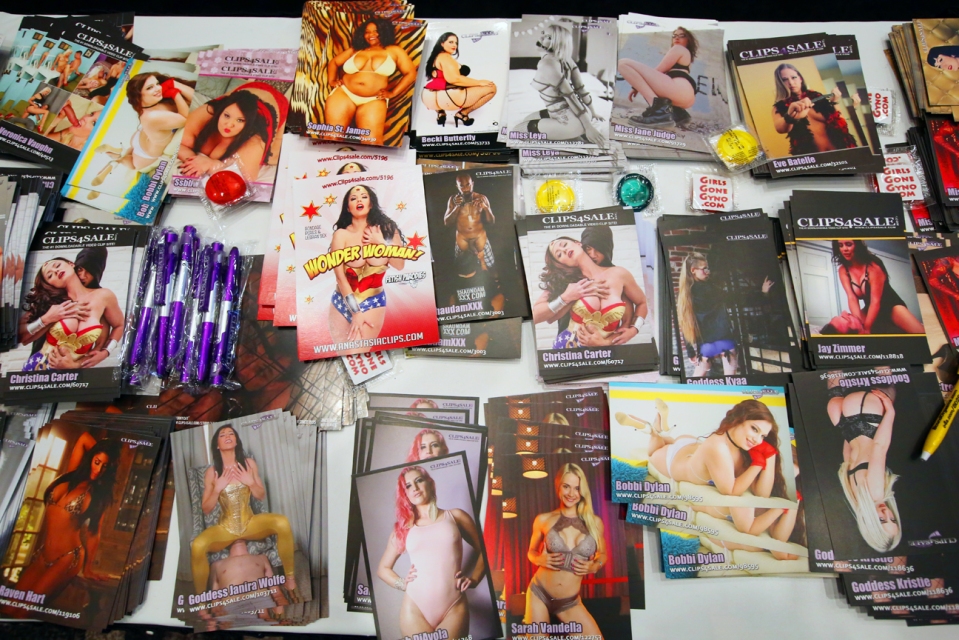 Adverts for online entertainers, pens, pins and condoms are displayed on a freebies table.